JEAN-JACQUES SEMPÉ AND LITTLE NICHOLAS STAY IN PRAGUE FOR THE SUMMER! – THE EXHIBITION IS EXTENDED UNTIL 19. 8.! 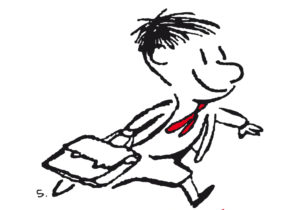 The exhibition Sempé – Little Nicholas and Other … celebrates the first month since its opening! In the first few weeks we have welcomed hundreds of visitors from both the Czech republic and abroad, as well as dozens of schools and families … the rich accompanying programme offered two commented tours, gave opportunity for unique gatherings and talks – with all leading Czech humourists in one place, for example. We celebrated the Mother´s, Children´s as well as Father´s day and launched new additions Sempé´s work in Czech by Baobab and Albatros publishing houses. Kids could not only create, but also meet Nicholas and his gang „in person“ – at the beginning of June, the Celetná Theatre Company came with its adaptation of Nicholas on Holiday, setting up a camp in the Villa Pellé garden. Overall, Nicholas and his friend enjoy Prague at full – just as the Czech artgoing public appreciates the work of Jean-Jacques Sempé at close. The very first opportunity of this kind in the Czech republic, indeed, deserves more time – thus, we extended the exhibition till 19. 8. !

Moreover, we also EXTEND „THE BEST DESCRIBED TROUBLE CONTEST“!
Come to Villa Pellé to pick up the writing lyout, get inspired by Nicholas and his friends and describe your greatest trouble. The best stories will be awarded. Deadline: 31. 7.