Jiří George Velinger – I See What I Hear 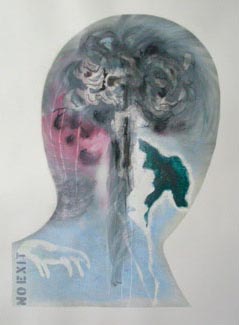 The cycle of large format drawings, on which the author works since 2011, although the idea was initiated by an aphorism he has written in his diary in the early 60s:
„… “EYES LOOKING INTO THE INSIDE OF MY HEAD, WHAT AN AWFUL INTERIOR! “ Jiří George Velinger, the sculptor, who was for many years a professor at Canada’s John Abbott College in Montreal, presents a series of drawings that are not the basis for further sculpture, but an independent representation of the interior of our heads.

The artist himself about the aphorism, that has subsequently generated a cycle of drawings:

In the early 1960s, I wrote this statement in my diary: “EYES LOOKING INTO THE INSIDE OF MY HEAD, WHAT AN AWFUL INTERIOR!” It was strictly an expression of feelings experienced by my generation, exposed to the never-ending pressure of communist propaganda forced into our young heads… Now, 50 years later, I am facing a somewhat different look into the “headʼs interior”. A purposely limited, stylized form of three views is not an attempt to create a “story inside heads”. What, then, is going on?  All audio-visual impulses produced by the brain, like a volcano sputtering endless streams of lava, in many ways remain incoherent. A cacophony of sounds and a calligraphic record of infinite movement. A seismogram of explosive neurons – a diary  of newborn as well as lost ideas and shapes. The stain, a blot, sound distortion, under certain circumstances, can take the form of a real concrete object.  This selection of exhibited works is from the series “I See What I Hear”, still in progress since 2011. As a sculptor, I have worked on various series of drawings for 30 years. My sculptures and larger drawings were always an important part of my thematic installations exhibited primarily in Canada and – since 1996 – in Prague. In my specific approach to drawing I am not attempting to find a form for future sculptures. 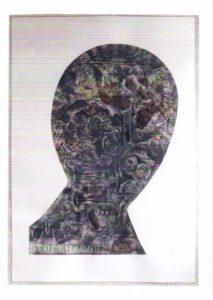 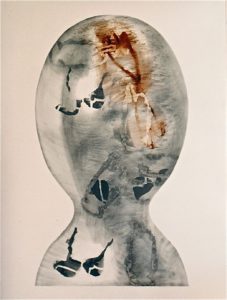