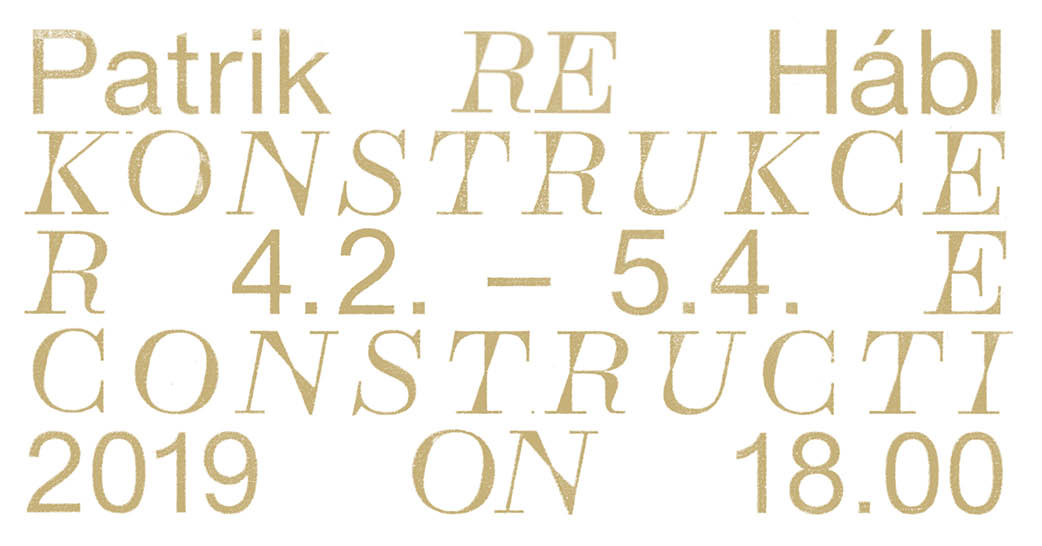 Patrik Hábl (1975), is one of the most noticeable representatives of Czech brushless paintings of his generation. For the past five years, his projects have drawn attention in the Czech Republic and abroad, including Germany and Japan. His dynamic associative distinctive style emerged gradually as a synthesis of the techniques of abstract painting and monotype. In addition to Hábl’s natural tendency to experiment, which remains one of his typical characteristic, this also reflects his schooling in Pavel Nešleha’s painting studio at the Academy of Art, Architecture and Design in Prague and in Vladimír Kokolia’s graphic art studio at the Academy of Fine Arts. After his basic means of expression have been stabilized, he began addressing further questions related to the viability of painting in the new millennium.

It is no longer about the painting as such, although it still remains in the center of his interest, but it focuses on its hidden potential. Patrik Hábl started to view his painting as a liberated medium, a subjective matter with a universal outreach, which he uses to “compose the world”, in which he can more readily intervene through painting. He demonstrated this for example with his generous painting intervention in the baroque interior of the Church of the Holy Savior in the New Town in Prague, where his composition replaced the original narrative altar paintings. Subsequently, he “constructed” an entire tower floor in the DOX center in Prague-Holešovice (2013). The most recent site specific painting invasion animated the respected multifunctional DRN building, designed by Stanislav Fiala in Národní třída Street in Prague last year.

Patrik Hábl continues monitoring the potential of painting through manipulating paintings and examining the parameters of their perception by viewers in his project RE:CONSTRUCTION prepared for the Villa Pellé Gallery. It is his most extensive solo exhibition in Prague, but above all it is a comprehensive space-image confrontation situation which permeates the three floors of the exhibition, and attacks the immediate surroundings of the building as well. It symbolically connects the exterior and interior, the micro-world and the macro-world, placing them on the same level. This very fact is interesting in view of Hábl’s “classical” nature of painting.

The basis of his work is, however, the analysis of the hanging painting itself, its layers, format, methods of creation and perception. It is this ever-changing and open platform that Hábl’s innovative painting installations follow up, leading to a partial re:construction of architecture into a painting. Painting demarcated by paper backing or the size of the canvas visually blends with parts of space, be it the floor, surrounding wall or even the entire room, becoming a new source of energy and empirical knowledge. In this case the disposition, parameters and the nature of the painting are subject to change as well as its perception, which undergoes an equally radical transformation. Starting from a normal visual perspective, it is possible to actually physically enter the core of the image’s space.

The arrangement of the exhibition follows this logic. The introductory part preserves a moderate form of a traditional gallery installation. All attention is focused on an image, its texture and natural associativity, which allows for identifying practically all of Hábl’s current significant methods of painting construction. Sometimes it is thick layering of color structures using rollers. At other times, it is the juxtapositioning of painted planes and their subsequent physical tearing apart, which allows the painter to get “under the skin” of the canvas with the painting “bleeding” a special sediment. An examination of the drying of oil and polygraphic paints plays an important role. Yet another method is represented by the concentrated thickening of the composition using almost graphical lines into a structural pattern which physically resembles lacerated scratches.

Above all, it is this section of the exhibition which demonstrates his orientation to the motif, which appears as secondary in some of his intuitive paintings, whether they be spontaneous appearances of landscapes or faces. The next level of the exhibition proceeds from a de:construction of a painting to its re:construction into an image space or situation, which are related to “another” way of emotive interaction with the viewer. This allows for a semantic “transformation” of the installation into a chapel, reliquary or a vault to take place in the viewer’s mind. The last section reflects painting interventions into particular environments, be they church interiors or a busy thoroughfare, in other words, a selection of artist’s most important projects which intimate the method of his artistic thinking and create a context for the painting installation created on the site.

Re:construction is often defined as a restoration to the original state. In parallel to architecture, Hábl’s exhibition re:constructs the actually experienced reality into an open world of paintings. It attempts to demonstrate that they can initiate a change of the view of everyday life and, primarily, that at the root of such a transformation stands a living process rather than a stereotype or a rigid dogma.